After 45 years, a lot of memories about my time at Sembach have faded as have many of the faces of the guys I worked and played with back then. The following is an attempt to remember a little bit about those long gone days. Probably some of the dates and organizational changes are incorrect and I did crib a bit from other websites. However, this is some of what I remember.

At the time we worked in maintenance crews of about six men including flight control, guidance, airframe and weapons mechanics and a crew chief. The crews included a weapons man because of the nuclear weapons in the birds and the explosive squibs that blew off hoses and cables when the birds were launched. Later we were in charge of placing the shape charges to blow up our own birds if the war went conventional and we needed to get rid of the nukes.

We were billeted at Grünstadt and it was great duty with little attention to spit and shine and not much chicken shit. We worked three-day shifts alternating nights and days and three-day passes were easy to come by. As a number of our launch officers were also pilots, the AF kept a few DC-3s at the Sembach airstrip so the launch officers could keep up their flight time and draw flight pay. Oftentimes the seats on these flights were open and all you needed was a three-day pass to travel all over Europe. The food at Grünstadt was pretty good (excellent compared to base chow) and we had a great cook who kept us fat and happy. I remember “midnight chow” and for a while we even had movies at the chow hall if you were not working on the pad. The off-hours in the Gasthaus in Grünstadt were memorable and it was a nice quiet town to visit. After payday, when one was richer and looking for a little more action, K-Town or Mannheim beckoned.

At the time the Grünstadt site was pretty self sufficient. Our birds (Mace A’s, later called MGM-13A) did require a lot of maintenance as all of the electronics were pre-solid state and pretty unreliable. Of course the Mace system was originally designed to be mobile (it never was) and our birds were on uncovered pads. This caused problems in the winter as the birds would ice up and this could cause a loss of mission. The worst thing one could do in those days was to lose operational status as somebody else (usually a fighter squadron) would have to pick up the slack. Nose covers kept the guidance system warm in winter and cool in summer, but the spoilers in the wings would freeze up. We tried wing covers, but these just froze on the wings. There was also concern about losing commercial power during an “emergency” as the site ran off local power most of the time. It was decided to improve the sites resulting in a major construction project, which included building permanent concrete block houses, installing concrete-lined cable trenches and back up diesel generators to provide power. We began to use commercial deicing rigs to keep the wings ice-free in the worst part of winter. As I recall, the construction phase was completed just about the time that the big reorganization started. Note that the missile shelters had not been erected yet. This happened after I left Sembach in 1963.

The 38th TMW underwent a fundamental reorganization on 25 September 1962 when it took control of the 822d TMS from the intermediate 587th TMG (including the old 585, 586 and 587 Tactical Missile Groups) which was inactivated the same day. The 38th TMW was composed of all the launch and maintenance squadrons at Hahn (now with the 89th launch squadron at site 4 and the 405th TMS at sites 5 and 6 and Bitburg (the 71st TMS with sites 7 and 8, both Mace B launch sites). In addition to the 822nd TMS (now Site #1 at Mehlingen), two additional TMSs were activated at Sembach; the 823rd (Site #2 at Enkenbach) and the 887th (Site #3 at Grünstadt). In addition, under the reorganization the missile maintenance squadrons at Sembach, Hahn and Bitburg became part of the 38th Missile Maintenance Squadron.

After the reorganization, most of the maintenance people were moved from Grünstadt to billets at Sembach. The crews would be bussed to the sites and we worked both day and night shifts. Later, only a weapons mechanic and airframe mechanic would spend their shifts in a maintenance trailer inside the secure area. Life was different on base with more inspections and bullshit to put up with. Many of us missed Grünstadt and that certainly held for the food. One time they served spoiled creamed chicken on base and poisoned so many of the maintenance troops that the wing lost a big part of its operational status. Talk about hitting the fan! On the plus side, the food did get a little better for a while.
Once during an alert, Jim Mier was told to go out in the sterile area alone and see what the MPs would do and how fast they would react. Sure enough the pickup drew up to the line quickly and Jim was soon looking a few M16s in the face. He pointed out that they better not shoot as we had nukes and other explosives inside the double line. This caused a problem for a while until an officer “observer” for the alert got it straightened out.

The Cuban missile crisis in October, 1962 was another big sweat for us (and everyone else in the world). I also remember being in the base theatre when President Kennedy was assassinated (November 22, 1963). We immediately went on alert and it scared the hell out of all of us until we found out what was going on. The scuttlebutt in those days was that we were less than 15 minutes by air from the nearest East German airbase. When the Nikes went up at the Army launch site on the other side of Grünstadt (we could see them from our site) we really got edgy. This was especially worrisome in that if we ever had to launch the maintenance crews were supposed to stick around and put together another bird or two– fat chance!

And the stories go on and on.
In early 1964, Gary Bergt and myself (both weapons mechanics) were transferred to the 417th Tactical Fighter Squadron at Ramstein AFB to complete our four year enlistment working on F-100s. The darn airframe mechanics we worked with at Sembach got sent home and were discharged three months early. This was really no big deal as both Gary and I enjoyed Germany and looked forward to new adventures.

(Click on photos to see larger images.)
Grünstadt Missiles – This picture shows the birds at Grünstadt down while construction was underway. 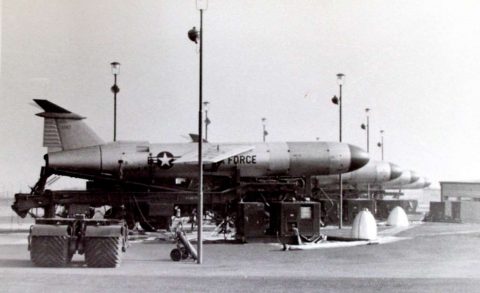 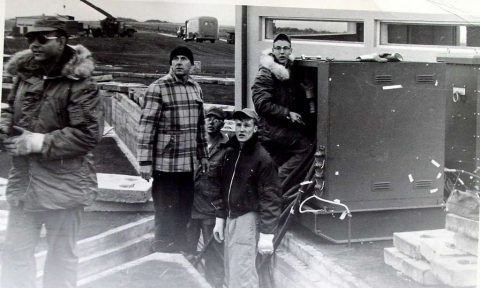 Also from your list; “Site Unknown: 38th Tactical Missile Wing/ 587th Tactical Missile Group / 587th Missile Maintenance Squadron. (prior to 25 September 1962)” A2C Milton C. Shannon Jr. and A2C Edward D. Sulver Jr. were airframe mechanics at Grünstadt when I was there. Probably the rest of the airmen were there to, but the old brain has faded a bit.

Enjoyed looking at your site and good luck with adding to it.