When I went to Sembach in June of 1956 I was an A/2C. I was making 97 dollars a month whether I needed it or not. 🙂 We did have a lot of perks that helped stretch the money however. The exchange rate was 4.19 DM to one dollar. We could buy a carton of American cigarettes for about I think 3-4 dollars and sell them to a German for 40 marks (about 10 dollars). The German Economy about 10 years out from the war was starting to boom and the locals were eager to sell to Americans who had ready money and disposable income. Credit was easy and there were some bargains, especially in clothes and electronics. Grundig a German electronics firm had top of the line equipment from reel to reel tape recorders (my generations IPod) to rich wood inlaid transoceanic radios and phonographs.

Every weekend in the service club various merchants from all over the world would set up booths to sell clothing and of course the silk Sembach jackets I’m sure you are aware of, with your unit and a map of Germany on the back and such other embroidery as you might order. There were tailors from Hong Kong who would measure you and have you a suit or sports jacket in a week or two, of the finest materials. Car dealers from New Jersey would sell you a car based on your rotation date. You would make monthly payments and pick the car up at McGuire when you rotated.

Since Europe was in general cheap at that time, many took advantage of the weekly morale flights. Pilots who needed to keep their time up would take a C47 out for a three day weekend and load it up with airmen with 3 day passes, and leave Friday afternoon and fly to one of many European cities from Rome to Lisbon, Paris or London and return late Sunday or Monday. This was a great perk and I remember many good times in the capitals of Europe, just as if I were a jetsetter. 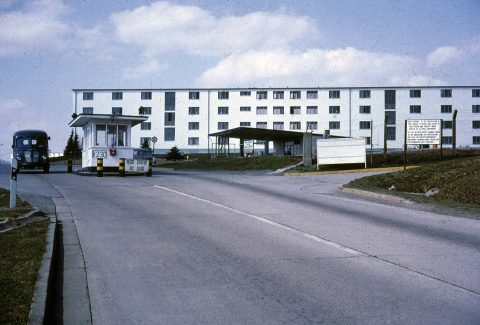 We all tried to find a source for the B-15 flight jacket as that was so warm and comfortable and not as bulky as the great parkas we were issued.

In 1958 Asian flu hit us and every bit of space on the base was used as hospital wards. The service club was full and when I got sick I had to stay in barracks as there was no space to hospitalize me. It was a trying few days. After that the AF instituted a flu shot every year and that almost killed me. My left arm was so sore that I devoted the rest of my career avoiding getting the shot.

Off base there was a bus to Kaiserslautern and some of us had bought cars. I had a MG TD. My favorite place was the Barbarossahof which I understand is still there. (It is.) Great wiener schnitzel and brockotoffle, and of course the pop top Biere. I think the bill for a full meal and several bieres was about 20 marks – 5 dollars. There was a small Italian restaurant that had the best ravioli with a dab of great butter on top. (Nino’s in the village of Sembach.)

The bar scene of K-town was I guess the same as all over Germany. There were the usual bars named after states, with what was thought to be art related to that state on the wall. Desegregation had been in effect for a time but the bars were defacto segregated. You knew what bars you could go to and where to stay away. There were AF bars and Army bars and you didn’t mix. 🙂

Frauleins were plentiful and friendly. Worthy of note many of us were not that experienced when we came over and almost universally thought the run of the mill Fraulein to be not that comely. Shaving was a rarity and they were very cadaverous or well fed. As time went on it was amazing the metamorphosis that came over these girls. They actually became quite attractive. So much so that many became engaged to service men creating a crisis of sorts. The Service put up a series of hoops to jump through to impede these marriages including long waiting periods etc. Many did marry however and the majority I think turned out well. I do remember an Oktoberfest in Munich sitting in a Biere tent at one of those long plank tables watching the hefty bieremadchens bring 15 or 20 1 liter biere mugs at a time, the grey ones with the HB on the side . Now that is a feat of strength. I still remember linking arms and swaying back and forth to the oompha bands and the drinking songs they played. What a time.

Of a sociological note the bars were stocked as it turned out with a rotating complement of ladies of easy virtue. They came from all over the continent to service the military’s needs and after several months would move on as circumstance mandated.