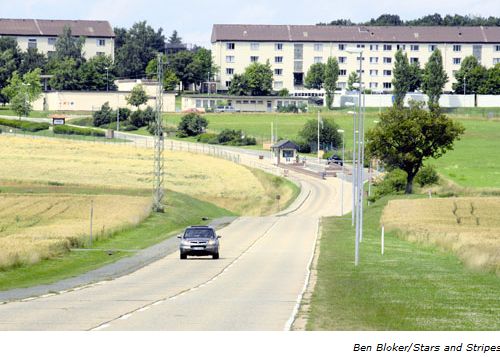 After conflicting information from documents and statements, Army officials have confirmed a military police unit will move to Sembach Annex, above, by October.

SEMBACH, Germany — In what could be the first of many such moves, an Army unit based in Kaiserslautern will soon move to the Air Force’s Sembach Annex.

The 230th Military Police Company, now based at Kaiserslautern’s Rhine Ordnance Barracks, will move to Sembach by October, Army officials said. They said it’s the only unit confirmed to transfer there so far.

Just north of Kaiserslautern, the roomy Sembach Annex is largely vacant but houses elementary and middle schools and the Air Force’s 21st Operational Weather Squadron. There also are barracks and a large number of vacant housing units.

A 2008 Army planning brief obtained by Stripes said several Army units could be on the move to Sembach, including the 230th MP Company.

When the brief first became public, Air Force and Army officials maintained that it represented a study and no decisions had been made.

“There has been no decision regarding future Army use of Sembach,” according to a statement from Installation Management Command-Europe. “Any impression to the contrary that the former garrison commander gave in previous public comments were erroneous.”

U.S. Army Europe and Installation Management Command – Europe officials declined to be interviewed on the subject.

For the move of the 230th MP Company to Sembach, Army and Air Force officials came to an agreement that allows the unit to be stationed there on a reimbursable basis.

“This helps our soldiers in two ways: They will be able to get out of their old gang latrine barracks at (Rhine Ordnance Barracks), and they will not have to put up with all the construction inconveniences until we build new barracks at (Rhine Ordnance Barracks),” according to an IMCOM-Europe statement. “Future Army use of Sembach would be contingent upon the outcome of the ongoing overall study.”

The mayor of a village near Sembach said he expects renovation work to begin on the annex this October, and the Army will relocate to Sembach in October 2010.

Münchweiler Mayor Christoph Stumph said it is good to know that the Americans will not completely leave the area. The lack of information from the U.S. military about the potential move was not very satisfying, he said.

“First, we did not know anything at all, then, step by step, pieces of information came out, but even at this time, we do not have something official,” he said.

Stars and Stripes’ Marcus Klöckner contributed to this report.