What does it take to mount a fourteen-year vigilance for freedom in an uneasy world? Whatever it takes can be found in the 38th Tactical Missile Wing. After nearly fourteen years of being a “Big Stick” in the inventory of the free world’s peace keepers, the 38th will honorably dismount its vigilance and hand its burden to a new generation of weapons.

A unique weapon system and the efforts of many airmen and officers have formed a single unit to complete a demanding mission. The weapon system was at first the TM-61 Matador using nothing more than cleared areas in Europe for launch sites. Later, the MGM-13A took the Matador’s place and was located at fixed sites. Weather shelters eventually protected the birds from the elements.

The men behind the system have been the airmen who pulled C.Q., the troops who responded to the alert siren at uncomfortable hours, the clerks who have fought the battle of the paper mill, the security guards who pulled their lonely duty in the snowy darkness and cold of German winters, and the technicians skilled in keeping the tempermental bird in good repair.

During these years, the launch crews stood ready to send their birds into flight, never knowing if the next countdown would be just an evaluation or the real thing. These same crews survived hours of training, testing, evalution and inspection to become a key factor in the impressive record of the Wing.

Always behind the scene doing their jobs have been the men providing housing, food, medical services and other life-supporting neccesities. Making the unit a complete community in itself during the past years have been the clergy and military lawyers as well as recreational and social planners.

Two officers, Lt. Col. Paul Ireland and Lt. Col. Louis Wright, presently assigned to the Wing have been with the Mace missile since it was a classified project in 1950. Now the two officers are helping other members of the Wing usher the Mace into retirement and onto the pages of history.

These have been the elements of the 38th Tactical Missile Wing.

PICTORIAL REVIEW – Something to remember the Mace by – a pictorial review of a once strong arm in the NATO defense system. From the typical local scene to a ‘ride on the Autobahn’, Site I, security at the sites, to maintenance and a tribute to the Mace people who helped support the missile (bottom right). (USAF Photos) 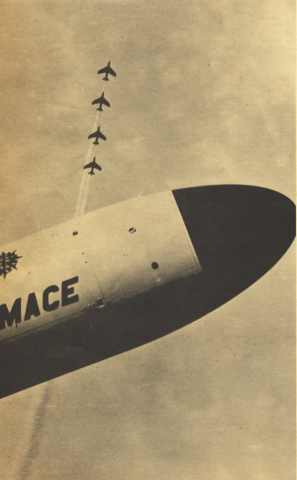 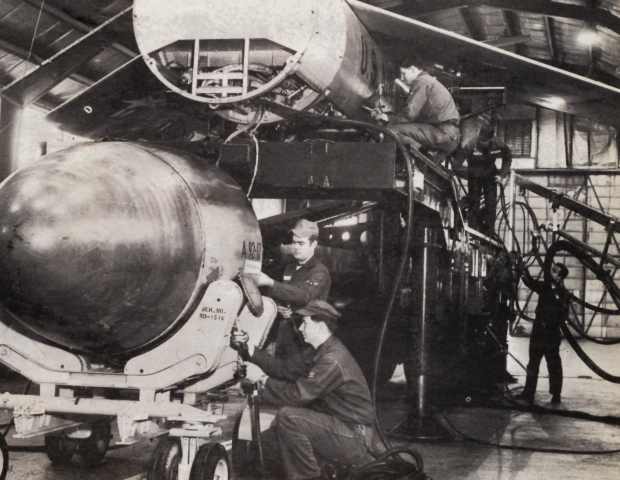