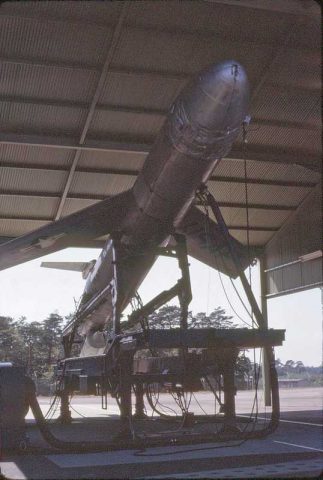 Just received an update regarding an anecdote that was posted on the website back in February, 2008 that described a lightning strike at Site #2 back in the mid 1960s…  (see below)

As I recall it, after the flash/boom, alarms started going off, I think the Tritium sniffer went off indicating that we had deadly, radioactive gas around. There was some reference later to a “rose metal” plug in the warhead melting. You guys reacted perfectly. You grabbed your checklists, and Flash (Allan Owen Jr.) and Russ (Russ Reston) ran outside and lowered the missiles,  just as they were supposed to. I think Mac (Sgt. Neil McCumber) and I called HQ and said we were taking the missiles off alert status. There was a little disbelief and argument, I believe, but I think they finally closed the autobahn near us for a while. At any rate, I think our crew handled it in a textbook fashion, despite not knowing whether it was a serious emergency. No surprise there, as I think we had the highest score made in the wing training complex. Once again, I attribute all of that to Mac. I think I also remember a bunch of guys from Sandia crawling all over the pad the next day and dismantling the warhead. I wonder if we had a Broken Spear that they covered up and nobody told us about. Like Walt (Russ Reston), I was goosey on duty for a while after that. As I get older, however, I think that might be a good way to go when your time comes. From a fat, achy old guy to plasma in nanoseconds. Beats a nursing home.

I recently found your site while searching for information on Nuclear Weapons personnel who were stationed at Sembach in the mid 1960’s. Reading through your Interesting Stuff section I was surprised to see the story titled “Lightning Strikes Site #2”. Having been involved in the aftermath of the lightning strike, the story brought back memories of my days at Sembach.

I was assigned to the 38th MMS from summer 1965 to summer 1968 as a Nuclear Weapons Technician supporting the three missile sites out of the Hochspeyer Munitions Area, just up the road from Site #2. We lived on base in Bldg 212 with all the other missile support personnel, but ate all our meals during the week at the Site #1 dining hall.

My crew, consisting of SSgt Bob Haag, A1C Richard Berg, A1C John Carter, A1C Joe Tarapata and myself were serving week-end standby duty when the lightning strike occurred. We were restricted to base in the event there were any problems with warheads mounted in the missiles. Since there were NEVER any warhead problems our standby duty consisted mostly of sitting in the barracks drinking beer, ordering NCO club pizza and playing spades or pinochle.

Not long after returning to base on a Friday afternoon we were notified by the CQ that we needed to report to Site #2 immediately and report to TSgt Clarence Baker who was our Quality Control supervisor at Hochspeyer. When we arrived, Sgt Baker briefed us on what happened and we proceeded to the pad where the missile was located. Since I was the smallest crew member it was always my job to crawl through the access hatch and disconnect the warhead from the missile. I was apprehensive at first, not because of the danger with the warhead, but I was afraid the missile might fire off.

As I remember, we removed the warhead and took it back to our maintenance bay where it was eventually turned over to the technicians from Sandia. The lightning strike did in fact melt the rose metal plug and allow the tritium bottle to vent. This resulted in the incident being classified as a Bent Spear.

Even though I didn’t find any information regarding any of my nuke buddies, it was a treat to read through all the stories and see names of people and places that I recognized.