The tactical missile squadrons are moving ahead in base-wide competition. The 822nd TM Sq. is pacing the base’s intermural Basketball League and winners of this summer’s golf league were five members from the 823rd TM Sq.

Tight Race
Competition started in June and ended in September with the 823rd grabbing the duffer title by a two point margin. Four members of each squadron team were allowed to play each week and team members could earn three points: one point for the front nine holes, one point for the back nine and one point for total holes won. 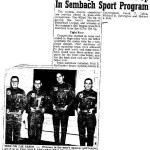