“The normal route to move missiles to Grünstadt and back was, of course, down the A6 autobahn. Very soon after my arrival in the summer of 1959, I inherited a special project to “proof” an alternative route via what the modern map below shows as route L395. The route went via Enkenbach, Alsenborn, Ramsen, Eisenberg, Ebertsheim; and turned to go up the NORTH side of hill to the site at Mertesheim. As you might imagine, on those narrow old roads it was an interesting route with an MM1, translauncher, and missile! 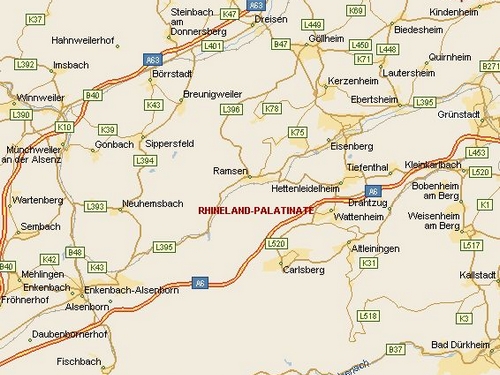 A base photographer was along to document points of interest.  After my report was turned in, I wound up with about thirty negatives of “tight spots” on the route. Some are quite dramatic.  I recall one (I think it was Eisenberg) where the very substantial houses went right up to the very edge of both sides of the very narrow road (nominally a two-way street, but only for VW’s, not MM1’s!) which went up to the very edge of the pavement. In the picture (below), the MM1 looks like it went from wall to wall! Meanwhile, a typically stout hausfrau was standing on her steps, broom in hand, gawking at Der Amerikaner Raketen coming down the street.

The picture below was taken in Mertesheim, not far from the site. It’s sobering to realize that the little boy, wearing lederhosen and leaning on the tree at left, would now be in his mid 50’s. 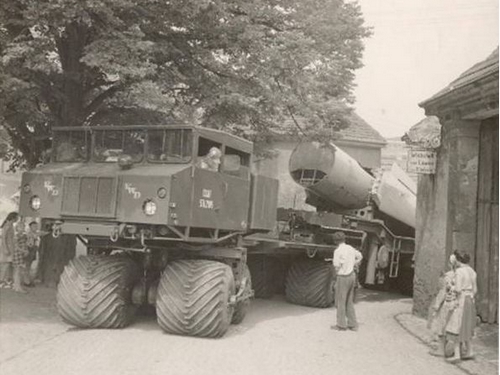 The tightest spot of the whole trip was right after the above shot was made in Mertesheim. At the edge of the village, the road made a tight right-left-right turn across a railroad track. It took several minutes of the driver going backwards and forwards to get this rather large contraption across the tracks; sure enough no sooner than we were across than a train went through!

After the report was written I wound up with the base photographer’s large format B&W “Graflex” negatives. IF I can find them and IF I can scan and reverse the images (and/or find some old prints), I’ll try to get the pictures to you. They’re quite interesting”.