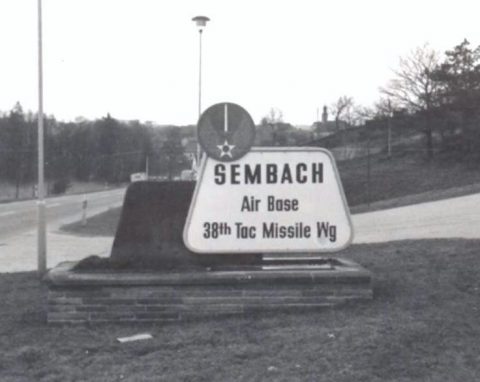 As you know, the Sembach Veterans Organization is organizing a mini-reunion for September 2012 to visit Sembach Kaserne (the former Sembach Air Base) in Germany. We expect some of your members who served at Sembach during it’s days as a missile base might like to join us. Our group includes members who served at Sembach from the earliest days to the recent present. I know we’d enjoy hearing the “missile stories” from your members. I guarded the empty sites and weapons area, but after the missiles were gone.

At this point we are still in the planning stage, so information is pretty general, but here’s a note we’d appreciate you placing in front of the Sembach Missileers. Travel to and from Kaiserslautern are “on your own” since members come from all over the USA, but we’ll have prepaid hotel and events. We’ll provide more details as they become available, but the dates (September 11 to 14, 2012) are firm and we do have official authorization to visit both Sembach and Ramstein.

Open to any Sembach Air Base veteran/family member.

A three night/two day mini-reunion with hotel, base and local region tour, German-American event, some meals.

Travel to Germany on your own, but join us for prepaid reunion hotel and events.