Russ, by only having been involved with the Mace during the RFML (Rapid Fire Multiple Launch), you definitely missed out on a lot of the fun we had with the initial mobile, one-crew, one-missile concept!

These pictures were taken among the abandoned WWII-era taxistrips and hardstands of the former Orlando Army Air Field. The second MM1 has the N&B (nose and booster) pack with a training (expended) booster rocket. It should have carried the missile nose as well, as explained below…

I really have difficulty understanding why Pentagon Air Staff thinking had insisted on making as large a missile as the Mace more expensive as a go-anywhere, mobile, air-transportable weapons system in the 1950’s environment. Maybe it was a result of wartime 1940’s WWII thinking where vast armies charged all over the European landscape, but by the 1950’s German farmers Klaus and Herman were unlikely to think kindly of us going hither and thither across their fields and fences with our huge MM1 prime movers and the missile on its translauncher with their marshmallow-like Goodyear Terratires!

When we were in launch crew training at Orlando Air Force Base, it was difficult enough just getting our monster around the streets of Orlando on the short drive from the base to “Signal Hill”, an abandoned portion of what had been Orlando Army Air Field during WWII.

By 1959 that airfield was “Herndon Field”, Orlando’s main civilian airport. It’s now Orlando Executive Airport; with the former McCoy AFB* twelve miles south of Orlando ….a SAC B-52 base when we were there ….becoming Orlando International Airport. The above B&W picture above shows a missile being driven back into OAFB, turning right from Bennett Drive onto Corrine Drive and into the base main gate at far left above. That gate is pictured again below. 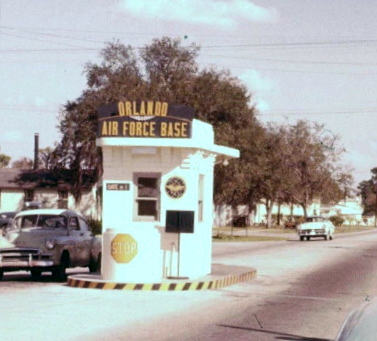 This moving of missiles around for our training always created a stir among the civilian populace! 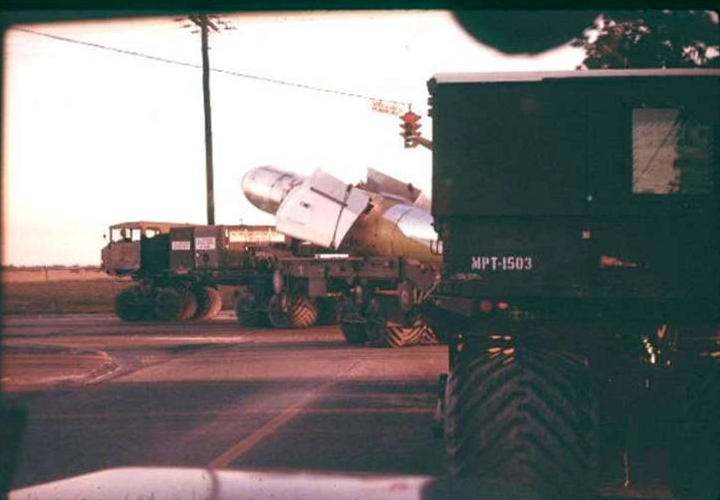 The above picture was taken from my jeep (as convoy commander) and shows my crew taking the missile on its translauncher to the training area, with the MPT (MM1 truck with Missile Preflight Tester Van) following. It’s shown turning east from Bennett onto Colonial Dr (Hwy 50) at the airport which is the open area in the background.

Our training area on “Signal Hill”, the former OAAF cantonment area, was all empty and overgrown back then except for the old taxi strips and hard stands; it’s located in the lower right portion of the airport property in the map below.

Today, all evidence the former Orlando Air Force Base …and, after the Navy took over and spent cubic dollars to make it their Orlando Training Center …has totally vanished; it’s like it had never been there. The developers even plowed up the old streets when they put down a new street layout of million dollar yuppyville houses: I couldn’t find a single recognizable landmark other than the two on-base lakes. 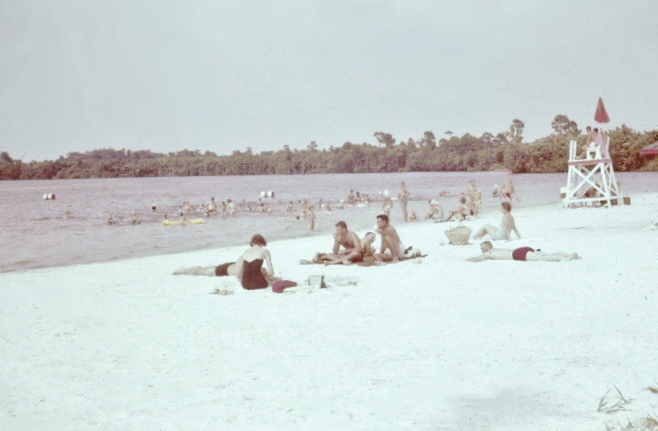 And weren’t those lakes fun back then!
Another good G.I. deal shot to hell….

On the map below, the OAFB lakes are seen directly above the eastern part of the airport. As I mentioned before, on my return a few years ago, I found driving down Corrine past where the old gate HAD been gave a feeling not unlike Alice stepping through the Looking Glass!

Getting back to our training: before anybody seeing these pictures says anything, the missile was NOT supposed to be transported with the guidance and W/H section (nose) attached, but we’d received special permission because the support equipment maintenance wasn’t up to speed yet on keeping all the cables, gears, cranks, chains, etc of the N&B (nose and booster) “pack” operational…. 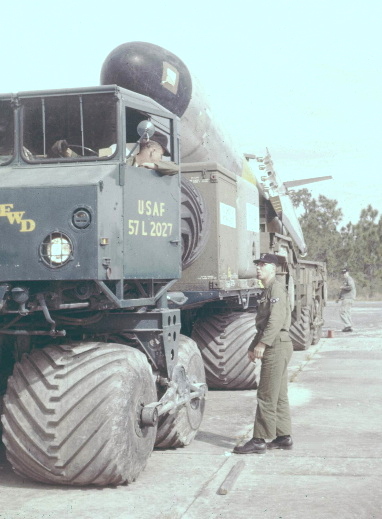 Part of our training including doing all this transporting and missile assembly at night …. 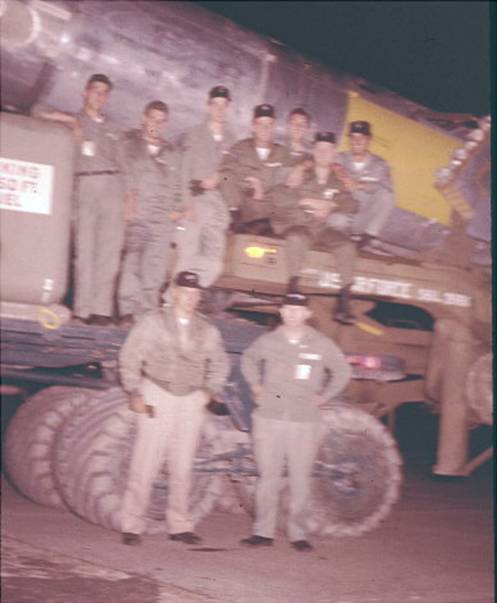 Can you imagine us doing this OFF site in Germany in a peacetime environment? Or at NIGHT? With a warhead? I’ve often wondered how much real mobility the later GLCM system had in this regard.

But I sure wish I’d had a better camera back then! That had to wait until I got to the AAFEX in Germany….

• The story of McCoy AFB/Orlando International Airport is quite a story in itself. It had originally been Pinecastle Auxiliary Army Air Field, as an adjunct to Orlando AAF’s training operations. Pinecastle got its name honestly: it was WAY out in the “piney woods” boondocks then! It was so isolated that Wright Patterson used the airfield soon after WWII for the initial unpowered glide tests of the Bell X-1, air dropped from its mother B-29! Then with the Cold War it was first developed into a SAC B-47 base initially named Pinecastle AFB, and soon renamed McCoy AFB after the wing commander, Col McCoy, took his Stratojet ballistic when he pulled the wings off during a Strategic Air Command “Bomb Competition”. The results were swift, predictable, spectacular, and fatal. Today, these long-forgotten name changes might create idle curiosity as to why baggage tags of passengers destined for Orlando International Airport bear the letters “MCO”….