I went to Sembach with the 11th TMS after tech school at Lowry AFB for Nuclear Weapons 46350. I was in the armament section of the 587th support squadron. 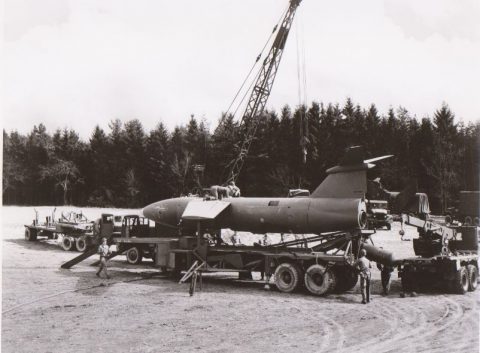 If you will permit me I’ll just touch on a few things from my era since they constituted the foundation of what you (i.e., Mace folk) experienced. We of course shipped over to Sembach as a complete unit, dependents and all, as the 11th TMS, detached from the 9th AF. We got to Sembach, landing on the flight line in Super Connies, after a flight through Gander, Shannon and Sembach. Many of our facilities were already built. A, B & C pads were functional and the armament complex was just being finished. While the armament complex was being finished we occupied the bottom floor of the barracks just at the top of the hill, above the Group headquarters. I remember standing watch on the dummy training nuke we had stored there in the hallway.

After about a month we moved into our complex and I was a member of the unloading team that unloaded our nukes (of course which we were not supposed to have) off of C124s which had flown direct from Warner Robbins AFB. Shortly thereafter we were accorded alert status which rotated among the three pads. One week on, two weeks off for the rest of our tour. During the Hungarian crisis we went of firing alert fully expecting to receive firing orders at any time. All pads were on alert and eventually C pad was dispersed to Hahn AB for several weeks. I remember standing guard with my carbine and one 15 round clip, in a blizzard to defend against the Russians. I guess they heard who was on guard as they decided not to come.

We had two rotations to Tripoli during my time. I was on the pad when we dumped a bird due to the improper installation of the JATO igniter and watched as a crewdog roped the fizzling bottle down. They were just starting to train for the transition to the MACE when I rotated to a ICBM post with the 51ADS at Vandenburg AFB CA.

We weathered the pandemic of Asiatic flu, where so many were sick they had to stay in their dorms, as the hospital and service club were full.

I wish I could remember the name of the restaurant on the left on the way to Kaiserslautern. It had the best schnitzel. Ah, I remember the Barbarossahof. Was it still there?

I remember the monthly morale flights to Paris, London, Lisbon and Rome. While there. I set up the football program for dependents. I’m really sorry you don’t have more mention of the real pioneers at Sembach.

Jim, sorry I don’t have much information about Sembach AB’s Matador era. I initially started the website to locate guys I served with in the mid-1960s. As my ‘hobby’ expanded, the website grew to encompass the 38th TAC Missile Wing’s Mace era at Sembach, but not its 11th TMS Matador roots. 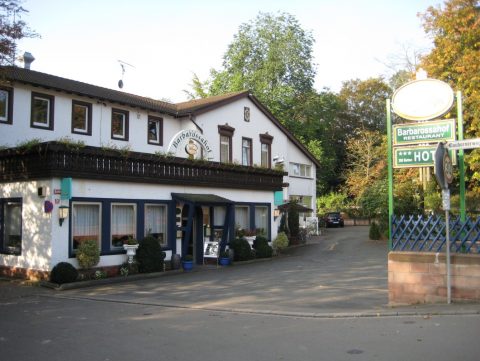 Yes, the Barbarossahof is still there. My wife and I stayed there in 2007 during our most recent visit to the Sembach area. The schnitzel is still delicious. http://www.barbarossahof.com/

I suspect my peers are aging out. I’m 74 and was one of the youngest. There were some unique things about us. We proofed the concepts of the use of the Matador. Our pilots flew the target routes and established the guidance networks. I’m not sure but i don’t think you guys (Mace) went to Wheelus. We did twice. I remember maneuvers with the Army in concert with their Atomic Cannon (which they couldn’t get through most towns 🙂 ) .

One thing I am sure of we had in common were the endless double deck pinochle games while on alert. Our launch officers would send out for a case or two of snap caps. I remember painting the side of our barracks after partaking of too much of a concoction, mixed up in a laundry tub in the barracks, and I had CQ in 6 hours. I remember sinking a M108 into the roadside ditch leading up to C pad in two feet of snow. It took us 6 hours and 4 winch equipped trucks to get enough traction to pull me out. Caution when in deep snow DO NOT engage low range 4WD and gun the motor you go sideways 🙂 ).

Our pads were bare concrete slabs. No infrastructure except the launch booth. Armament had it great. Our vans were M109s with heaters and electrical outlets and plugs for the 60KW. We had coffee makers, a small hotplate and refrigerator. There were three of us in the crew so we were comfy. On maneuvers we had no spare power for the hot plate so we punched holes in the side of a C ration can, filled it with dirt and soaked it in gas where it made a very efficient stove.

Coming back from the armament complex the road had a sudden right then left turn to go around a giant tree. This tree bore countless scars from various contacts with errant cars. I figured out how to down shift and upshift to fly through that curve. It was such fun. Wonder I wasn’t killed.

I installed wing destruct packages in Tripoli so I carried Dets in my pocket and Prima cord coiled up around my neck. We would go to eat at the ultra-secret radio intercept site just down the road from the site, loaded up with all that explosive. Wouldn’t get away with that today would I? 🙂

I loved Germany, Kaiserslautern and especially Baden-Baden, where I had a girlfriend. Of course Garmisch and Bavaria were beautiful (AND CHEAP). When I went over I was an A/2C. I made 97 dollars a month every month, once a month, whether I needed it or not. A friend went to Wolfsburg and bought a brand new Beetle for a little over 1000 dollars. Grundig reel to reel tape players were dirt cheap as well as the huge consoles. Our exchange rate was 4.19 to one. We had representatives of Hong Kong tailors come and take orders for suits and slacks for really no money and of course the embroidered Sembach Missile jackets. US auto dealers came and took orders for the car of your dreams to be delivered on your rotation. You made monthly payments and picked up your paid for car on rotation in NJ. Remember cars then were 3-4 thousand dollars for top of the line.

A comment on Matador photo above. It shows the JATO bottle being installed by the armament crew. Our duties included the maintenance of the warhead and physics packages in the depot. This included the mechanical, as well as the fusing and firing systems; the transportation and or storage of the warheads and physics packages; the installation and testing of the warhead components before and after installation; the installation of the physics package into the IFI tube when on alert and the removal of the green safeing plugs with the red firing plugs when a firing was ordered. We installed and tested the wing destruct mechanism and installed the JATO bottle and its igniter and checked continuity. When going off alert these procedures were reversed.

The JATO bottle weighted about 1,800 pounds and was basically a steel tube with a 42 degree nozzle welded on it filled with I think 8 cylinders or grains of Picric Nitrate. It was ignited by a bowl of black powder screwed into the back of the bottle that was ignited by an electric squib. We lost a bird in Tripoli because of an igniter was I think cross-threaded and it blew out the back end when pressures got up in the bottle. The bird just rotated on the front support and never left the launcher, while the bottle rolled around on the ground spewing smoke and fire everywhere. One of the launch guys got a rope and somehow restrained the bottle (which was not completely ignited).

A couple of quick paragraphs about Tripoli. We flew over from Sembach in C119 flying boxcars, full of cargo. We sat where we could. I had made a nest and went to sleep. I awoke with a bustle of activity around me. Everybody was getting their chutes on. It turned out we had an oil leak in one engine which fortunately was controlled but it was exciting.

We landed at Wheelus which was the largest AB outside the US in the late afternoon. We got settled in and decided to rent bikes and pedal to Tripoli. Problem was we didn’t know where it was or how far. It got dark and we chickened out and beat a hasty retreat back to base.

We shortly started launches and spent a great deal of time at the pads. When on base, we spent time assembling the missiles which were shipped in wooden crates. The nose cones came cradled in a crate about 10ft. long and maybe 7ft. square. We just dropped the front end and slid the cone out. When there was a tractor trailer load of crates and scrap lumber, they were loaded up for the trip to the dump outside the base to which they never made it.

If you’ve never been there, there is no wood to speak of. The only green area is about a mile wide next to the beach. Therefore wood was an unusual and valuable commodity. Consequently the road to the dump exited the base gate and had to make a hard right turn on to the highway. We were met there by a mob of Libyans clamoring for the wood. Our NCOIC was obviously a gypsy trader. After he went to talk to the leaders of the mob blocking us, the elders took of their skull caps under which folded Pounds started to appear. It was handed over and we backed off. That wood and crates disappeared off of the truck like ants carrying leaves. We made about 10 dollars apiece. Later in the week driving along that road we saw neat rows of nosecone crates lined up on a hill with families ensconced within.

I’ll write later about the fun we had on the pads racing the Libyans for the spent JATO bottles.