Many thanks to Fred Horky for helping to “educate” me… Russ. R.

After reading Single Missile – 43 Minute Launch, Russ Reston sent an email to Fred Horky with some comments/questions. In a reply, dated Mar. 29, 2008, Fred responded as follows:

Fred, very interesting. Boy, did I have the wrong conception of “single missile”.

And I assumed you knew, I guess!

I had always thought the missiles were trailered around Germany, on a continuing basis, to make it difficult for the east Germans/Russians to track, and then readied for launch as needed?
That was pretty much the original idea …but with the technology of the day it wouldn’t have worked reliably enough. Too many fragile vacuum tube electronics, too big a missile, too big support vehicles. It was a good case being a reach too far for the technology of the day. It was also not politically practical.

…and the SIM Missile flights you participated in, gave ground controllers practice guiding the missiles to their targets. With ATRAN guidance, I can understand why the missiles had to be launched from designated locations, but I thought ATRAN and the RFML launch concept were implemented at the same time.
The ATRAN “lock-on box” (where the launch phase was over and the ATRAN actively started trying to match its 35mm film map to what the radar saw) was an area several miles down range (I recall about twenty-miles or so). If aimed correctly, the missile could be launched from anywhere in a rather large ground footprint and dead-reckon to find the lock-on box.

But think about the German farmers’ reaction in peacetime if we were charging around inside that several-mile wide footprint with a huge missile, its support gear …and a weapon! And can you imagine the security ramifications of that, I shudder to think about it?

Was Matador a roving missile concept?

Not really. Of course, I wasn’t on the Air Staff at the Pentagon so I don’t know precisely what their CONCEPT had been, but in a practical sense the Matador wasn’t really mobile either. Unless the U.S. planned to do a “First Strike” to start a war, which would never happen, U.S. tactical missiles would be more or less forever tied to fixed sites. They never were running around in the boondocks.

Did it prove to be a logistical headache and was therefore replaced with the TM-76A? Did the TM-76A always have the ATRAN guidance system?

If so, that would make sense, the transition from Matador to TM-76A would require establishing the fixed sites (e.g., Mehlingen, Enkenbach & Grünstadt). 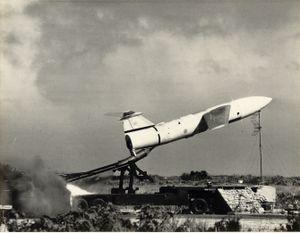 Rather slow development of the original TM-61 Matador had started fairly soon after postwar evaluation of German technology. It was originally designated as a “pilotless bomber” B-61, with that “model number” receiving designations right along behind manned bombers like the B-47, B-52, B-57 and before other bombers like the B-66, B-70, etc. For a while, the Matador was being further developed with Goodyear’s advanced ATRAN guidance as the TM-61B, (I have a photo around here somewhere with a development Mace marked prominently as a TM-61B). But ATRAN made it really become a different weapon, so it was decided the Mace needed its own designation as the TM-76A. That’s why the Matador designations skipped from TM-61A to TM-61C.
See http://en.wikipedia.org/wiki/Mace_%28rocket%29

In 1962 all missiles were redesignated in a sweeping, DOD-wide aerial system redesignation dictated by Robert Strange McNamara (his real name, BTW) ; that’s when the Matador became the MGM-1, and the Mace the MGM-13.

As a side note, only a very few aircraft system designators wound up totally changed, thus preventing mass chaos. For example, the Navy’s F4H Phantom II. It was the fourth “F for fighter” design for the Navy from McDonnell (the H) which McNamara had forced down the Air Force’s throat as the F-110. Then it became simply the F-4 for everybody.

Are you confused yet?

To recap, the TM-61A was the original version with external ground-based guidance. Rather than sit here writing for an hour I’ll just refer you to the Matador link in Wikipedia. See http://en.wikipedia.org/wiki/MGM-1_Matador : they have a very good article including operational concepts, crew manning, etc.

With the 8 concrete pads initially at Grünstadt, was there always a TM-76A on each concrete pad? How many of the missiles were kept on alert / “cocked”? How many crews would it take to handle the equipment on all 8 pads?

The following is copied from my original message, below:
Back to the old days. Except for periods of higher alert, six of the eight pads usually had missiles loaded with warheads and booster rockets, electronically checked out, and on alert; but without any power applied to the missile. (All missiles were in a horizontal, “checkout” attitude, not elevated to the launch attitude.)

Our four Missile Preflight Test/launch vehicles (MM1 flat bed truck with Power Packs and MPT test van mounted) would either be parked fully hooked up to one of the alert missiles, or in use at one of the remaining two pads for training, checking out another missile, or in use for the assembly and disassembly of missiles coming from/going back to the base for maintenance.

I guess I’m really a dummy re the events before RFML. When I arrived at Sembach, RFML was ?old hat? and the only change I remember in 2+ years in the blockhouse is the construction of the sheds.

During the 1980’s President Reagan created MUCH controversy in Europe (not to mention among our own faint-at-heart and peaceniks at home) when he trumped a destabilizing Russian threat to deploy a new surface-to-surface system against NATO. That was when the USAF deployed the “GLCM” (Ground Launched Cruise Missile). It’s still always called the “Glick-em”, BTW. Included in the new missile units was a familiar name: the 38th Tactical Missile Wing! This was a true mobile missile, as the Mace might have been if it wasn’t so damn big.

The weapon was a ground based version of General Dynamics Navy “Tomahawk” missile,

a much smaller weapon than the Mace, and built in many different versions. It looks something like a torpedo, before the wings, control surfaces, and jet engine air intake are flipped open after the missile left its launch platform. This could be an armored box on a ship like the USS Missouri which fired them during the original Gulf War. (In fact, those were the conventionally H.E. armed cruise missiles that the wide-eyed CNN reporter Peter Arnett described zipping by BELOW his hotel window during that action!) 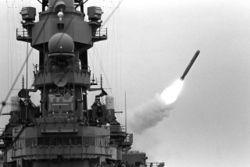 Different versions can also be launched air launched from a bomber, or even from a submerged submarine torpedo tube …or out of a mobile multiple missile trailer of the USAF, like the one below! 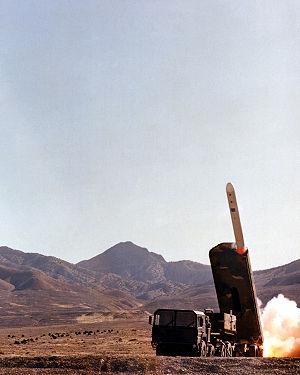 The bird is just kept pretty much locked up in its box until needed, being virtually maintenance free; even the engine could be stored for months but fired in an instant and it would crank up and FLY!
See http://en.wikipedia.org/wiki/Ground_Launched_Cruise_Missile
The USAF version was called the BGM-109G.

This was all long after our time there, of course: I just read about Reagan’s oneupmanship in Aviation Week. I have no idea of how much (if any) of a REAL shell-game was ever done to hide Glick-em’s (moving them around, etc). In any event, the Glick-em’s were only operational about as long as the Mace had been, but with the result that by the end of the nineties the Russians finally realized they weren’t going to win that eyeball-to-eyeball war; the result being the Glick-em’s AND the Russian nukes being pulled out.

The missiles were all (except for a very few museum survivors) publicly chopped up. And not long after that, the Evil Empire collapsed.