I found a mid-1960s photo of Tiger Stadium and I can see the large concrete entrance portal (to the MOC – Missile Operations Center). (Looking at this photo reminds me of the Rod & Gun Club on the top of the hill. They used to have the BEST greasy hamburgers.) 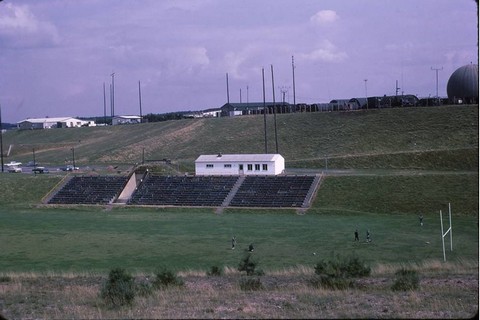 Note being a “sportsman”, I only recall getting over there once in my three years at Sembach. I can’t even remember “what for”, except maybe for this picture.

The dyes on the original slide were badly shifted, but then I do recall that sometimes the summer days at Sembach looked about this “orangy” with pollution, before it was called ‘pollution’ too!

My only “Rod & Gun Club” story relates to one of my flying “weekend cross-countries”.

Most of first “X-C’s” had been early in my tour when my “proficiency” flying was in the Sembach’s C-47 (aka “Gooney Bird” throughout the Air Force). I was the A/C (Aircraft Commander) as a 1st Lt on one of those trips (it seems that a lot of rated Captains, Majors, Lt. Cols, and Colonels WOULD have liked to take the trip. But they were all married, and the Wives) Intelligence Network must have known all about the charms of London, because they couldn’t get Kitchen Passes!

These occasional trips were laid on to take a plane load (about twenty-five) “good-guy” airmen on a weekend pass to London. (Those that wanted to go, but weren’t chosen, would likely say those that went were “toadies” ..or worse ..of the various “1st Shirts” around the base.)

We flew into RAF Bovingdon, a bomber base predating WWII, not far outside of London. It had been an USAAF 8th Air Force base during and after “the big one”, and eventually reverted back the RAF before being closed completely, like so many other bases.

My web surfing tells me (see www.controltowers.co.uk/B/bovingdon.htm) that the former aerodrome is now mostly occupied by one of Her Majesty’s maximum security prisons. Among other things, while it was still open postwar, it was used in filming several films about WWII, including Steve McQueen’s “The War Lover”.

Anyway, the main thing we Sembachers were interested in about RAF Bovingdon, was that it was not very far from last stop on the “tube” (aka, “Underground”, or subway).

It was really a fine three day weekend, but I don’t remember sleeping very much. 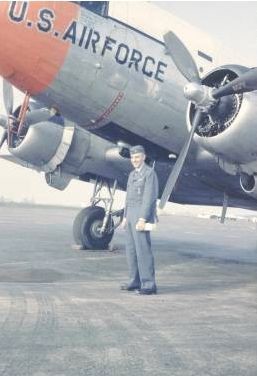 Above, me at the airplane at Bovingdon; below, at “Picadilly Circus” at about 0200 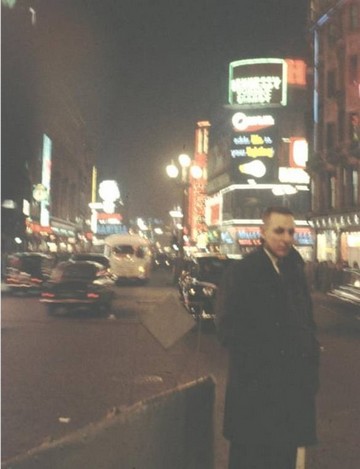 Of course, I did the requisite “touristy” things too: below, the Tower of London… 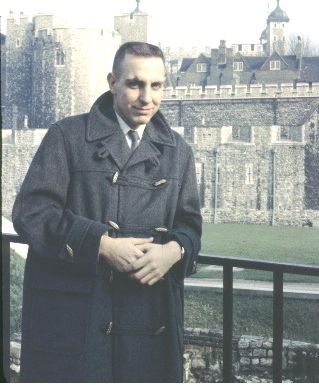 …and of course, Westminster and “Big Ben”. 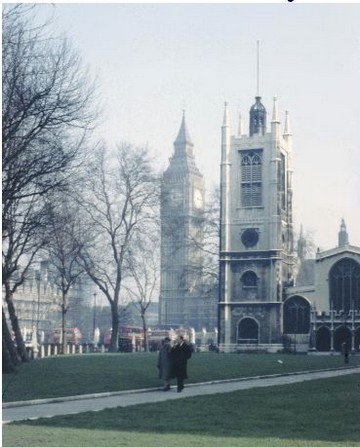 …and Tower Bridge, (NOT London Bridge!) 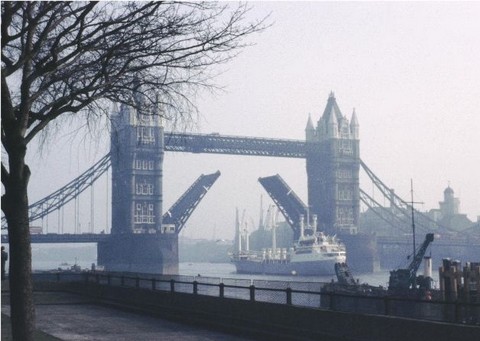 But I got distracted myself about my one Rod & Gun Club story. That was much later, when I was flying the T-birds on Simulated Missile missions, and DIDN’T get but one chance for a cross-country. But it was a good one: to Paris! That one was a Saturday week-ender to Dreux Air Base, a USAF C-119 base about fifty miles from Paris where I had a lot of friends. The old buddy I hoped to see wasn’t there, but under “friend of a friend” Air Force rules I hooked up with a guy and we went in to Paris. Didn’t get back to Dreux until after the sun was up.)

My “rod & gun” trip was to Torrejon Air Base, just outside of Madrid. In those days it was one of SAC’s many “reflex” bases where B-47’s deployed for months to stand alert. Fellow launch officer Johnny Walker (really!) was a Sembach R&G club member, and naturally had reciprocal privileges at the Torrejon R&G. That’s how he bought the Spanish pistol for me that I still have. In the MOC the nuke rules required the duty officer to carry a weapon, but the old standard Colt M1911A1 automatic was a pain in the butt (or back) wearing on twelve hour shifts in an office chair. Hence, buying the little Spanish “Ruby”, which was an exact carbon copy of the Smith & Wesson 2″ barrel .38 special police detective type. (The same company built exact copies of the Colt .45 as well; all their semi-auto pistols were called “Llamas”.)

I wound up paying the extravagent price of $25 for that little revolver.

The really ironic part was that while we had been gone, the rules were changed so that on my first shift on return, I didn’t need to carry a pistol any more!

A couple of years later I did get some use out of it, though. That was after I’d rotated back from Sembach to Pope AFB in 1962. The next year, still VERY early in the Vietnam war, I went on a six-month TDY “Classified Joint Training Mission” to Vietnam with a squadron deployment of C-123’s. For side arms, we had regular G.I. issue guns available, but that early in the war that they also allowed us to take personal weapons, as long as they were listed on the orders.

It was really a very loosey-goosey, “Terry & the Pirates” sort of adventure. Besides personal weapons like the two S&W .357 Magnums seen below, guys took all sorts of other hand guns, and also obtained “in country” an assortment of more potent guns like the submachine guns seen below: a .45 cal M2 “grease gun” (at left below) and the 9mm Swedish K (at right). 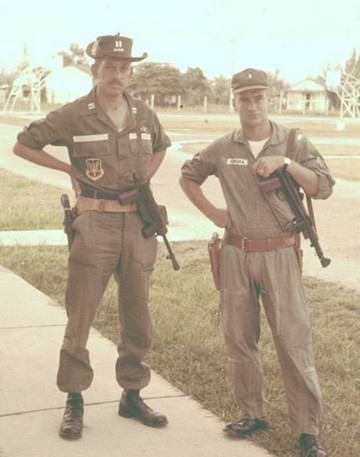 The 2nd Lt at the right was my copilot; a really sharp lad which reflected in the E.R. I gave him when we left. He lived up to it: Vern Kondra wound up with 3 stars and command of a Military Airlift Command numbered Air Force.

Other weapons found in the mix were former WWII German MP 36 9mm SMG’s (always called Schmeissers, see en.wikipedia.org/wiki/MP-36). We heard that the reason so many of these MP 36 SMG’s were to be bargained for in ‘nam early on, was because they had come to Vietnam during the French part of the war, as a favorite weapon of former German SS troops in the French Foreign Legion!

Below in a picture taken at the Kham Duc Special Forces Camp up in the mountains, I am in full regalia, with my little “Ruby” pistol in a locally made special holster, one of two a Vietnamese leather shop made for me. For a “long gun” I carried an issue M1A1 carbine. The idea behind having two weapons was that while we were unlikely to have to bail out …we didn’t fly all that high anyway …a bigger concern was getting stuck on the ground at some forward air strip. Then, it would be nice to have a weapon that could “reach out and touch somebody” a little farther away than pistol range! 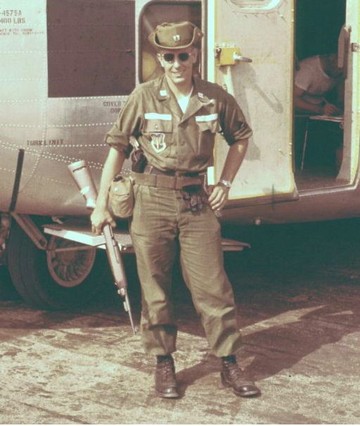 You’ll understand our mission if you’ve seen the Mel Gibson movie “Air America” in which their C-123’s in civilian markings figured prominently in Laos. We were doing the same basic mission in Vietnam, on the other side of the border. Basically, “beans & bullets”, plus rations on the hoof and whatever would fit through the door; to the Special Forces camps up in the mountains. 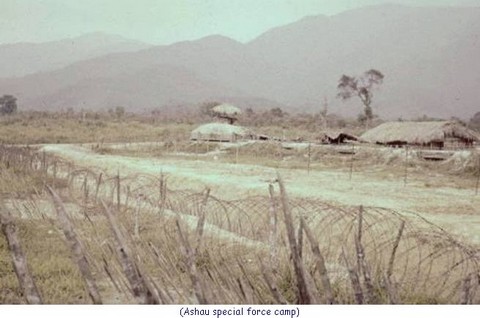 The ugly duckling C-123 never got any PR that always seems to go to the zoomy-zoomy fighters …especially early in the war when hardly anybody, even in the Air Force, could find Vietnam on a map. Author Walt Boyne (former director of the Nat’l Air & Space Museum) tried to rectify that with an article in the AFA’s Air Force magazine about “Mule Train”, which was the code name for that early-war operation. Ready his article here: www.afa.org/magazine/feb2001/0201mule.asp I provided many of the anecdotes and several of the pictures were from my slides.

I’ve gotten pretty far off the track, but this keyboard sometimes seems to run away with itself…