March 7, 2011
Some interesting information and photos from Fred Horky.

As mentioned, I’m trying desperately to cull through all my treasures to cut the bulk down some before our move to NC.

Just now I cane across these two “lost” pictures I’ve had for about fifty years. I can’t remember how I got these obviously-official 8×10 pictures of the JB-57 missile simulator. Anyway, they just surfaced, but NOW I have a scanner to digitize them!

Two B-57B’s had been converted; they had first been “bailed” (loaned) to Goodyear to develop the ATRAN, and then deployed to Germany to be used as Quality Control on guidance maintenance.

Each picture has text material pasted to the back.

Attached are scans of the two pictures, and the text material now typed into my PC.

I don’t know if I ever mentioned it, but I got to fly ONCE in the back seat of that fascinating apparatus, watching the monitors as the ATRAN took us from over Site II with an actual target film for a target in then-very Red Czechoslovakia. The ATRAN had us jinking all the way down past Munchen hell bent for the Czech border. If the pilot hadn’t disconnected the guidance system and headed back to Sembach, we might have started WWIII …or at least either been in a heap of trouble, or dead. But the ATRAN was still saying, “NO, NO, it’s THAT way!”. That flight really made me a believer in the Mace and ATRAN!

Don’t have time for the whole story, but the short version is that on a day off from regular duties at Grünstadt, I was hanging around base ops trying to cadge an extra sortie on a regular “sim missile” T-33 …they were used to train MSQ-1 radar weapons controllers whose wartime mission was to direct Matador missiles.

Sembach had one pilot and one navigator assigned to fly the JB. When the navigator didn’t show up for his flight (a definite “No-No”!); I was standing there, in flight suit, on flight status, and familiar with the ATRAN, so to prevent scrubbing the mission despite the rare beautiful weather, I was pressed into service to sit in back and monitor the ATRAN. It turned out to be my only “Bomber” flight time of my whole career!

Also, I kept my bachelor buddy Mike Barbolla’s butt …he was that navigator ….out of a crack

Fascinating story, I’ll write it up for you if you’re interested. 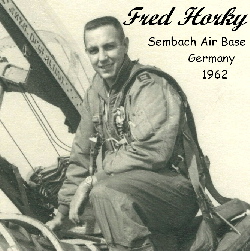 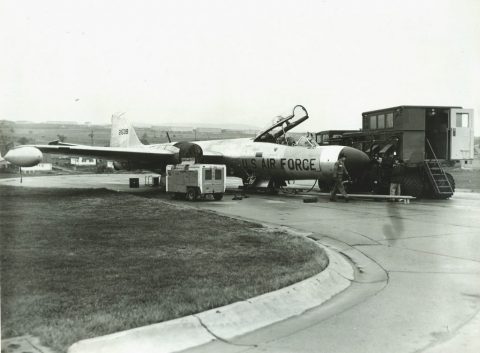 The Simulated Missile of Sembach

Shown on a hardstand at Sembach AB, Germany in 1960, this half airplane, half missile is being checked out as a “stand in” mission for the TM-76A Mace missile. Converted from a Martin B-57B (S/N 52-1539) by the Goodyear Aerospace Corporation, builders of the Mace guidance system, the JB-57 served to check system reliability of the missile’s ATRAN guidance system.  Shown with the Canberra/Mace is a Missile Preflight Tester (MPT) van “counting down” the JB-57.  It consists of the MPT test console/cab and a “power pack” auxiliary power unit both mounted on a flat-bed MM1 truck.  This unit is identical to those used on the Mace launch pads for countdown and lunch.   (Note: the MPT was employed for the original, mobile “single-missile” launch concept: the Mace system was soon reconfigured into the RFML (Rapid Fire Multiple Launch where a single crew counted four missiles down for a rapid launch from a fixed site.)

Sembach Air Base was almost unique in the Air Force by having its flight line significantly separated from the administrative/housing area of the base. In this picture, the barracks of “the hill” can be seen almost a mile away, behind the JB-57.  This separation dates back to the 1953 origins of the base.  When the cold war became hot, land had to be condemned to build numerous new air bases.

Sembach’s flight line was built first, on fields condemned by the German government, over strenuous objections of land owners.  Soon an administrative and housing area was proposed: landowners objected even more sternly when the German government soon tried to seize the more prime fields adjacent to the village of Sembach.  A compromise was reached by building barracks, offices, and family housing farther away on the forested hill; hence the base’s unique configuration. 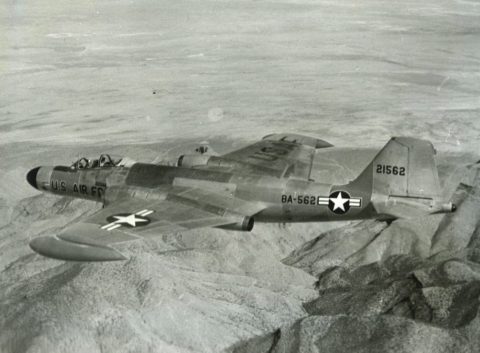 Shown in flight over the New Mexico desert and mountains, the half-TM-76A missile and half B-57B bomber test bed was used extensively for development tests of the missile’s ATRAN (Automatic Terrain Recognition and Navigation guidance system. Two aircraft were converted: USAF S/N 52-1562 and -1539. Both aircraft were later deployed to Sembach AB Germany when the missile system was made operational, to be used for reliability tests. The aircraft were finished natural metal overall, except or “day-glo orange” conspicuity marking bands on forward and rear fuselage, and both wingtips, including tip tanks. Markings were in black, as was the missile radome. The anti-glare panel was black but did not extend over the missile guidance system section, ahead of the day-glo band.